I first caught Torrance onstage last year in Bard on the Beach’s production of Rosencrantz and Guildenstern are Dead which, being one of my all-time favourite plays, I was nervously hoping they weren’t going to screw up. They didn’t, not by a long shot. They took a difficult play and made it look easy, top to tail showing a sound understanding of its intricacies and finding all the funny there was to be found. Torrance’s work was exemplary, displaying a talent that has found a home on both the local stages and TV shoots. He is a series regular on the soon-to-be-aired CBC series jPod, based on the novel by local writer/artist/actor/playwright/blogger/legend Douglas Coupland. According to sources close to this reporter, it’s going to be awesome. 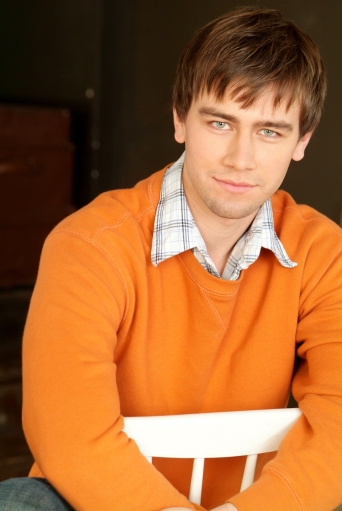 1.) In one word, describe your present condition.

2.) In the amount of words of your choice, describe the condition of the Vancouver theatre scene.

Let me preface this by saying that I’m a relative newcomer to the scene. That being said, here’s what I’ve noticed…

It is very rare that I see an awful play in Vancouver. It is also very rare that I see a truly amazing play. I think the main reason for this is often the script. Plays aimed at the older crowd are a little too “Aw, shucks!” while plays reaching for a new, young audience try too hard to be relevant and end up preachy. Whatever happened to just telling a good story?

Take a boring or incomprehensible script and throw a lot of talent at it, and you end up with something decidedly mediocre. I think we get a lot of that in Vancouver. Having not seen a lot of theatre in other places, I’m not sure that it’s much different anywhere else.

All this being said, I think there are some really exciting things happening in the city. I really love the Electric Company’s work. I also love that James Fagan Tait and Joelysa Pankanea’s work is trickling into the big theatres like the Playhouse and Bard. I also think that the attendance at Bard’s studio stage is very encouraging, getting mostly full houses out to plays like Troilus and Cressida and Timon of Athens.

Slight tangent here. Wouldn’t it be interesting to test the limits of the audience that Bard has nurtured? People have proven that they’ll come to see weird Shakespeare, and even a little Stoppard. But what would happen if they were to mount a new Canadian play? Would they still pack the house every night? I have a feeling they would. There’s something about the event that is Bard on the Beach that gets people excited about the show.

I do wonder sometimes if the quality of the plays has any effect on attendance? People go see the shittiest-movies-that-ever-shitted in droves. That seems mostly to be a product of marketing, and an abundance of people with no taste whatsoever. Is it simply a lack of marketing keeping these people away from plays? Or is it that people want to disengage, and a play requires active participation?

3.) What is the place of theatre in our bustling TV/film town?

I’m not sure that the TV/film industry really affects the place of theatre. Firstly, Vancouver audiences tend not to even watch locally made TV/film. Secondly, local TV/film tends not to tell local stories. So really, the only place to turn for our own stories is the theatre. Think of it in terms of satellite radio versus local radio: sure, satellite gives you great stations from all over the world, but sometimes you want your Vancouver radio personalities and your Vancouver traffic report and all your other Vancouver shit. In the end, they serve different functions and both are relevant. The same can be said for film and theatre.

4.) How does the fact that most actors here target a TV/film career affect the quality of stage acting in Vancouver?

Having recently gone from doing theatre for several years to doing TV, I can say that it’s a bit of a tricky gear-switch. It might be even harder to switch back. In my recent theatre auditions, I’ve had to struggle to project and be a little bigger with things. So I can understand the criticism that Vancouver stage acting can be a little too subdued at times. Maybe film and TV have something to do with that.

That being said, maybe it’s just the generation gap or different tastes or whatever, but I think some theatre acting can get a little hammy. Sometimes I’ll be watching a show and I wish things were a little more grounded and stand-and-deliver, you know?

5.) How well did your BFA in acting prepare you for the working theatre?

The training I got at UBC was pretty superb for the most part. I was lucky enough to be in a class that went through the program during a number of staff leavings and hirings. In the end, we got the best of both worlds in that we had the support and nurturing of the full-time profs coupled with the industry expertise of some great sessionals. They’re also really good about bringing in outside directors to work on the shows with the students, and doing co-productions with local companies. I can directly attribute my career at this point to a single play I did at UBC that started a chain reaction.

Be passionate about what you do. If you don’t give a fuck about what you’re doing, nobody else does either. Actually, now that I read that out loud, it extends beyond acting too.

7.) Christopher Gaze has called his Bard on the Beach the “quintessential Vancouver theatre experience”. Please defend.

Well, judging by their attendance, I don’t think I really need to come to their defense, but here goes!

Starting with the obvious, it’s outdoors, in tents. This actually facilitates something much more interesting than a view of the Vancouver skyline. Without the controlled environment of an indoor theatre, the performance is subject to rain, torrential winds, party boats, airplanes, birds flying into the tent, etc. This adds an element of unpredictability not only for the actors, but for the audience as well. Vancouver never really lets you forget that it’s right outside the tents, happening all around you.

Secondly, the shows are filled to capacity every single night. And while the reasons for this can be argued, what it means is that you’re sharing an experience with hundreds of other people on any given night. Bard seems to attract a crazy cross-section of the population, from Bardophiles reading along in their scripts to ESL schoolchildren looking really bored. There is definitely some kind of uniting force about the whole event.

And the last point I’ll touch on is the diversity of the shows presented. The mainstage rakes in the people who want to see the big plays, particularly the broader, bawdier comedies. The studio stage is actually an amazing place to see lesser-known plays. The mainstage goes big, while the studio stage keeps it deliberately small, creating a more intimate experience. So if you want to see something a little more “for-the-masses”, they’ve got you covered. But if you want to see something more weird and experimental, they’ve also got you covered.

There’s something about his plots and characters that are incredibly universal. Someone watching a Shakespeare play for the first time would probably feel like they’ve seen the same story a million times before. So the stories feel very modern. But the language is what sets them apart. We all wish we could express ourselves as eloquently as he can. There’s something about the language that elevates a simple story to epic proportions.

9.) Given a time machine, what would you tell a young Torrance Coombs just starting out in the biz?

Shut up and listen. But when you really believe something, stand up for your idea. Wishy-washy is boring. Don’t be afraid to fail.

10.) What are your top 3 reads for the aspiring actor?

– A Practical Handbook for the Actor by Melissa Bruder – the process it describes is a little more mechanical than I like, but the principles are essential to the way I work.

– Acting in Film by Michael Caine – really helped me out in the conversion from theatre to film/TV.

– The Applause First Folio of Shakespeare – not so much for the aspiring actor as for the actor looking to dig a little deeper into Shakespeare. A fantastic text that can provide some really helpful clues in deciphering some of the trickier scenes in a play.

At this point I am unemployed indefinitely. Fingers crossed for a second season of jPod. But the cool thing I’ve discovered about TV is that even when my work is done, the show isn’t over. I haven’t even had an audience yet! I get to look forward to watching jPod on TV at the same time as everyone else. Which, by the way, will be airing Tuesdays at 9pm on CBC, beginning January 8th, 2008