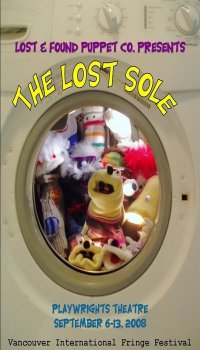 “I hang my socks on the clothesline now!” — T Bagger

A twisted yarn about a sock’s journey out of the dryer and into his own skin.

Do you ever wonder what happens to your socks when they go missing in the dryer? Join the Lost and Found Puppet Co. as they present their first production, “The Lost Sole” at the Vancouver International Fringe Festival on Granville Island from September 6th-13th.

Follow us as we weave a tale of a sock thrown from a life of monotony into a world of excitement. Weirdness abounds as he wanders through a crazy world of odd socks. Matchless, shoeless, and drawerless, he travels from the topsy-turvy world of the dryer to the snobbish top-drawer and everywhere in between. Will he cling to a life of predictable patterns, or separate himself from the lint?

Lost and Found Puppet Co. is a new Vancouver Puppetry and Object Theatre collective. Founded by puppeteer and performance artist Maggie Winston, Lost and Found presents the stories of objects through object animation and various forms of puppetry.