Your Department of Culture, the Canadian National artistic activist group that “represents the support of Canadians for a broad range of national artistic programs and practices”, announced the formation of a 30-seat honorary Senate today on their facebook page…

The incoming appointees reflect the multifaceted and widespread opposition that exists to neo-Conservative governance in Canada, with representatives from British Columbia, Alberta, Saskatchewan, Manitoba, Ontario, Quebec and Newfoundland. Appointees are artists and activists. Like the Canadian Senate, this honorary position has few responsibilities. Unlike the recent Conservative appointees to the Canadian Senate, terms are for one year only, renewable, and incur no cost to taxpayers.

These newly-ordained Senators have all worked closely and tirelessly with the DoC over the last year to keep the needs and rights of the national artistic community in the face of a government that would see us all relegated to the status of panhandlers and redundant citizens. They are all dedicated to continue to push for a political system that supports progressive ideas and a government that respects the role of art as an integral component of society, not an unnecessary luxury. All Hail. 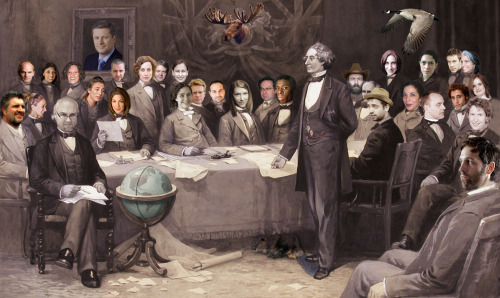 Click here for a legend identifying the pictured senators