If you were to put a face to the future of Vancouver independent theatre, it might look a bit like Craig Hall’s. Young, energized, overworked and perhaps spread a little thin…this is the price of being a trailblazer. He wears big hats on both sides of the playing field; as an artist and an administrator. Already the Artistic Director of Rumble Productions, Vancouver’s All-Terrain Theatre Vehicle, Craig is a theatre-maker (Read this wonderful origin story of Clark and I Somewhere in Connecticut, the play he put together with collaborator James Long and several others) and a highly-praised and in-demand Director-around-town, and was just bumped up from Vice-President of the See Seven Performing Arts Society to President by past President Diane Brown.

Nobody’s going to accuse Craig of not doing his part for this city’s independent theatre industry. 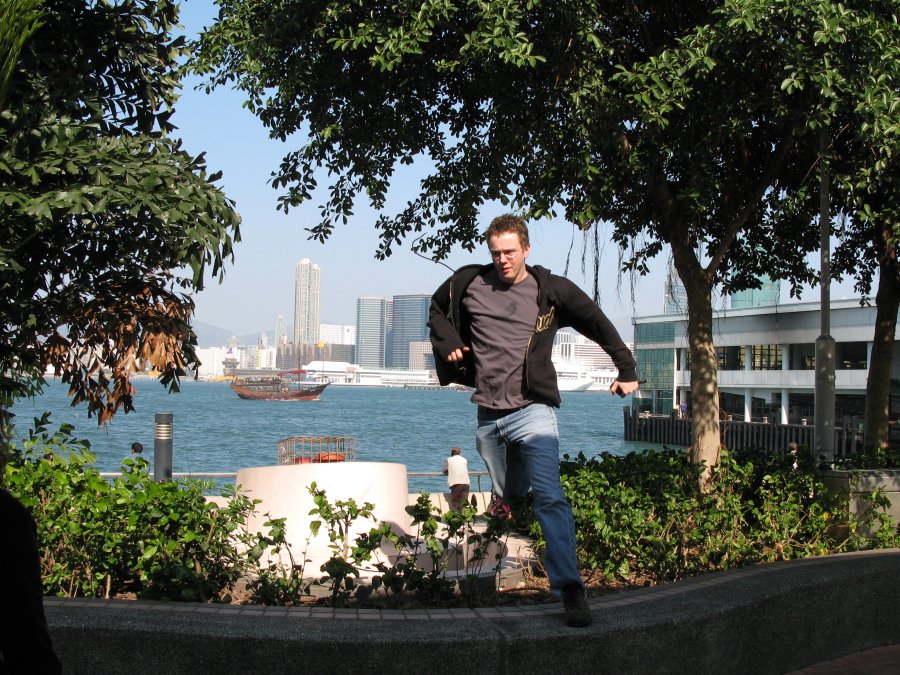 Strapped. For time and money, but who isn’t. I’m learning to make the best of it.

2. In as many words as you care to use, describe the present condition of the Vancouver theatre scene.

Theatre makers in this city are starting to take bigger risks, to be more rigorous in their craft and to challenge the perception that theatre is medicine (supposed to be good for you but sometimes it tastes foul and more often than not it makes you drowsy). We are poised, I think, to make work that is undeniable.

I’m not sure that they fuel each other. When I started at Rumble, they were like a couple of selfish siblings each yanking on a pant leg and demanding more attention than a person could possibly provide. I’ve had to learn to lock one in a room while dealing with the other. If there is a positive aspect to the relationship, I guess it could be in the way that the admin work can inform the artistic work. On several occasions I have cracked a piece by being forced to articulate the projects process and goals to funders.

4. Please explain the vision behind See 7.

I wasn’t around in the early days of See 7, but my understanding is that it was founded at a time when Vancouver’s independent theatre companies were struggling to build audiences. The thought was that amalgamating the works of a number of companies into an affordable subscription series would garner some much needed profile and would encourage audiences to take a risk on something new. It worked. This lead to a number of copy cat initiatives popping up all over North America. See 7 is still very popular with audiences, and the passes are still selling out every year.

5. What do you know about theatre that you didn’t before creating Clark and I Somewhere in Connecticut?

A great many things. I know that the general public has very little knowledge about how theatre is made and that this mystery can work for and against us. I know that words make theatre artists accountable to our subjects in a way that visual artists are not. I know that Lawyers are expensive. I know that honesty is almost always the best policy. I know that a little controversy can get you a lot of attention. I know that by putting an actor in a fuzzy bunny suit and pointing a bunch of high wattage theatre lights at him, you can create some very bad smells.

6. What’s your best advice to young companies just starting to build for the long haul?

Don’t get ahead of yourself. Enjoy being a project based company for as long as you can because as soon as you become an operating company you will be beholden to an incredible amount of bureaucracy and there is no going back. Be uncompromising. Don’t let things like funding, unions and lack of facilities stop you from making your art. Also, don’t feel beholden to some antiquated idea of how theatre gets made.

7. What can we as a community be doing better towards establishing a new generation of theatre-goers?

8. If you were given one million dollars towards the improvement of the indie theatre industry in Vancouver, how would you spend it?

I would buy a building and create a dedicated creation/rehearsal space. It would be large enough and malleable enough to approximate any of the stages in town. It would be fully equipped with lighting and sound, allowing you the option to introduce design elements into your creation process far earlier. You would have the option to rehears on your actual set, under your actual lights and to see and hear your show in its entirety before you ever hit the theatre. This would likely cost far more than one million dollars but what the hell.

I think working on both incarnations of Hive ranks right up there. First working with that incredible group of artists and seeing them take so much joy in the risk and the chaos. Then seeing audiences embrace the event without prompting from critics.

A Director Prepares by Anne Bogart (How many times has this one been mentioned? She is a genius without pretension.)

What is Scenography by Pamela Howard (Mara Gottler turned me on to this one. A view of collaborative theatre from the perspective of a master designer. Valuable for everyone.)

Experts of the Every Day. The Theatre of Rimini Protokoll. (In truth I’m just reading this one now but I’m loving it. Picked it up at the PuSh Festival this year after hearing their Manifesto at the PuSh Assembly. I am fascinated by their work.)

Rumble is co-producing (with Theatre Conspiracy) David Harrower’s Olivier award winning play Blackbird in March. One of the best play’s that I’ve read in some time, directed by one of Vancouver’s most underrated Directors (Norman Armour). Really looking forward to it. I’m also directing a show called Jocasta at Studio 58. It is part of a seven play cycle called City of Wine (by Playwright Ned Dickens, based on the city of Thebes) commissioned by Toronto’s Nightswimming. The seven plays are being produced by different theatre schools across Canada throughout the year. All seven shows will then travel to Toronto in May to be presented at Theatre Passe Muraille.